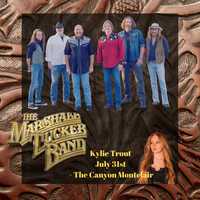 Whenever you drop that proverbial quarter into the virtual jukebox of songs that always manage to reach down and touch your soul the exact moment you cue them up, you inevitably find certain artists have a deeper resonance than others when it comes to providing the soundtrack that mirrors the highs and lows of your own life. The Marshall Tucker Band is one such group that continues to have a profound level of impact on successive generations of listeners who’ve been searchin’ for a rainbow and found it perfectly represented by this tried-and-true Southern institution for over five decades.

The Marshall Tucker Band continues to be played on Classic Rock and Country radio, and they have never stopped touring. With hit singles like “Heard It In A Love Song,” “Fire On The Mountain,” “Can’t You See,” and “Take The Highway,” MTB earned seven gold and three platinum albums, and continues to delight audiences from coast to coast!

If you purchase a ticket at a table, you are required to purchase dinner. You must arrive by 7pm.

Under 18 Must Be Accompanied by a Paying Adult.